Pinewoods Camp is closed for the 2020 season.
​Please see the letters on the J4 homepage for more details.
CDS-Boston Centre's July 4th Session at Pinewoods is both a celebration of teachers and musicians (currently or formerly) from the Boston area and an opportunity to bring new or distant artists to Camp. We've got an exciting mix this year! 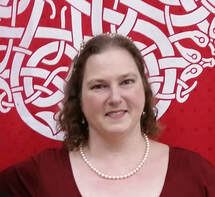 Joanna Reiner has taught English dance for over two decades.  In addition to being one of the leaders of the Philadelphia-based Germantown Country Dancers, her calling has taken her from Amherst to Ann Arbor, from NEFFA to Hey Days, from St. Croix to Vancouver, and other points abroad, including many sessions at Pinewoods Camp.  While known for her clear calling and instruction, Joanna loves teaching workshops for ECD callers, and workshops that explore ECD technique, new dances, and how people learn and remember dance choreography. In her spare time, Joanna uses her dance teaching skills to help demystify financial data for arts and culture nonprofits throughout the US. 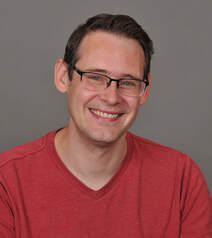 Dan Blim is an energetic caller from Columbus OH who calls English, Scottish, and contra dances, and teaches music history. Off the dance floor, he's happy to geek out about musicals, board games, and puns. 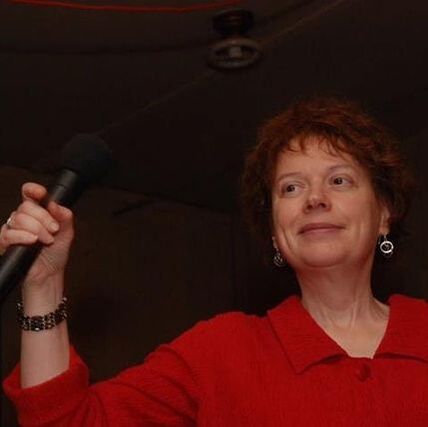 Lisa Greenleaf calls regularly in the Boston and New England areas and has been a staff member at dance camps and festivals throughout the country and beyond. Her specialties include traditional and contemporary contras, fun squares, challenging dances of all shapes and sizes, and callers' training. Then there’s cribbage and board games, two more specialties. Life is good.​ 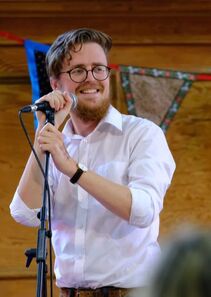 Ben Moss has been a part of the folk scene for as long as he can remember, Morris dancing for over 20 years in the North-West, Cotswold and Molly traditions, playing violin and melodeon with some of the foremost ceilidh bands in the UK as well as being a ceilidh caller and a singer/performer of his own material.
https://www.benmossfolk.co.uk/

Photo by Jeffrey Bary.
Meg Ryan first attended July 4 weekend in 1984, where she took her first English clog class with Andra Horton (waltz!).  Since then, she has attended many sessions at Pinewoods, taking clog classes whenever possible. She has studied with clog greats such as Pat Tracey, Alex Woodcock, Sam Sherry, and Harry Cowgill.  Thanks to Tony Barrand and Kari Smith, she also knows the American wooden shoe dances of the Marley family of Connecticut. Meg has performed in the United States, Canada and England. When not clog dancing, Meg is driving on the MassPike to get to or from Pinewoods and works as a nurse by day. 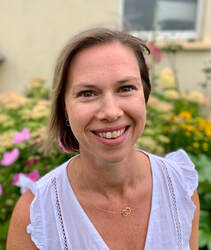 Lily Kruskal Leahy is looking forward to returning to July 4 this summer! Currently living in Co. Cork in Ireland, Lily is a music educator and choir conductor in local schools, is a member of her local community choir, and is the founder and musical director of a small vocal ensemble in her town of Mallow. She has been involved in choral singing all her life and has been the musical director for several small vocal groups over the last several years. Making beautiful harmonies with friends is one of her favorite activities, and she is looking forward to sharing this at July 4th Weekend at Pinewoods!

Jamie Beaton fell in love with traditional song, more years ago than he will admit, at the legendary Fiddler’s Green folk club in Toronto. Since then, he has been singing an assortment of British and North American songs at camps, clubs, festivals, Morris dance events, pubs, and other public and private locales, often in tandem with long-time friend, John Mayberry. Jamie is also an avid Morris dancer and teacher, and a fairly reliable contact for those renowned showmen, the Bullero Brothers. 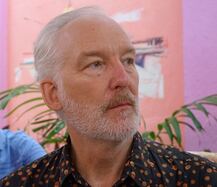 John Mayberry started to look all starry peered toward at ordinary tune, a greater number of years earlier than he will yield, at the mind boggling Fiddler's Green society club in Toronto. Starting now and into the foreseeable future, he has been singing a plan of British and North American songs at camps, clubs, festivities, Morris move events, bars, and other open and private areas, as often as possible pair with long haul partner, Jamie Beaton. John is in like manner an enthusiastic Morris craftsman and instructor, and a truly trustworthy contact for those popular players, the Bullero Brothers. 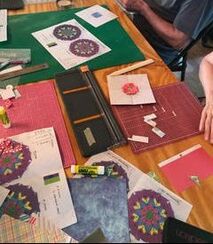 Miss Laura Sprung is a lover of all things paper, scissors, glue, tape, rulers, cutters, etc. Her earliest influences were Captain Kangaroo and Mr. Green Jeans making things out of oatmeal boxes and string. Currently she makes folded paper items for sale and gifts. She has been teaching paper crafts at camp for many years now and delights in the creativity that comes from campers: she gives you the basics and you run with it...but not scissors. 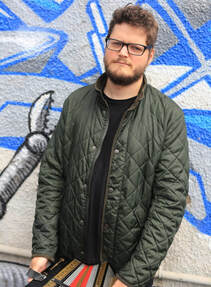 Alex Cumming is a traditional Singer, Accordionist, Pianist and dance caller hailing from Somerset, England, now living in Greater Boston, MA, USA. He performs songs and tunes from around the United Kingdom and America with a great depth of knowledge of the tradition. Alex has made his mark on the folk scene with his rhythmic dance-able accordion style, strong voice and his fun and engaging stage presence. The lesser known fact about Alex is that his main instrument for many years was the Drum Kit, playing mostly Big Band Swing and the occasional Heavy Metal gig. Alex is bringing back his drumming again, this time into the folky world where he belongs! Alex is currently Program Director for CDSS English Dance Week at Pinewoods and is Music Director at the Unitarian Universalist Church of Medford, MA.
http://www.alexcummingmusic.com/

McKinley James is a Boston based cellist who received her bachelor's degree from New England Conservatory in classical performance. She grew up playing contra dances with the band Irregulars. They played dances around New England and their highlights include the Flurry Festival, New World Festival, and winning first place in the Young Traditions Competition. She is a founding member of the band Night Tree, that won the New England Conservatory’s Honors Ensemble. Together they have toured throughout the US, opened for Solas in Portsmouth Music Hall, and played in Jordan Hall and Rockwood Music Hall. They released their debut album in 2017 with producer Seamus Egan, and toured in Europe in 2018. McKinley also plays classical music extensively playing with many orchestras. She has soloed with the Champlain Philharmonic Orchestra and toured in China with her piano trio. In 2019, she participated in the Baroque International Masterclass in Gaming Austria. She has an interest in English Country Dance music since it brings together her love of early classical music and Celtic music. She now teaches and performs in Boston.
https://mckinleyjamescello.com/ 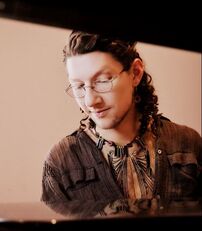 Aaron Marcus is well-known throughout the country for their performances with Frost & Fire, Giant Robot Dance, and The Turning Stile. Aaron brings exuberant energy, danceability, subtle lyricism, deep emotion, and spontaneity to any band arrangement, whether an accompanist on piano or clogging while playing tunes on concertina. And this can be best exemplified on their recent award-winning solo album, “Men Don’t Cry,” featuring all original music. You can look for Aaron's latest collaboration with Scottish fiddler Joanne Garton, on her new album, "The Bees Knees," and Aaron's forthcoming project of spoken word poetry set to music with Sam Sanders. Aaron most loves to teach percussive step dance, and play for English, Scottish and contra dances locally in Central Vermont. When not dancing, Aaron works as an endangered-species botanist while serving on the Diversity and Equity Committee for their agency, and will happily tell you about all the cool plants of Pinewoods. 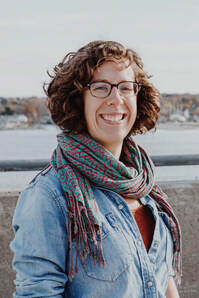 Emily Troll plays fiddle and accordion and currently hails from South Portland, ME. An avid lover of French-Canadian and Old-time traditions, she’s spent many years at Pinewoods and Maine Fiddle camp honing her skills as informally as possible. You’ll often see Emily playing with her all-girl band, Anadama. When she’s not playing, she’s probably dancing. When she’s not dancing, she’s probably teaching fifth graders to do long division.

Photo by Trish Finn.
Dave Langford is an experienced and versatile fiddler and guitarist and fiddle teacher from the Boston area. A veteran of 30+ years of playing for public dances, weddings, parties and late night sessions, Dave combines multiple styles of fiddling with fierce energy and drive. He has been a staff member for music and dance weeks at Pinewoods, Ogontz, Mendocino, Augusta and Christmas Country Dance School at Berea KY as well as many hundreds of weekend dance events around the US and beyond.  In addition to Stomp Rocket he travels widely with The Latter Day Lizards and Supertrad.

Glen Loper is known in the New England contra dance world for his work on both the mandolin and the tenor banjo, and the occasional prolonged yell.  He is in several dance bands that play for weekends across the country including Stomp Rocket and Riptide, and he is also a core teacher at the Maine Fiddle Camp. Glen is a patient and experienced teacher, and teaches lessons privately from his home in Portland, ME, where he lives.  He also runs live sound at the well-loved listening room One Longfellow Square (in Portland, ME, and he likes to think he has a good sense of humor.
​https://glenloper.com/ 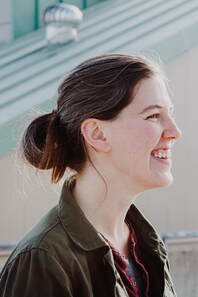 Bethany Waickman is a guitarist based in Portland, Maine. She accompanies some of the country's finest players, be it at dance halls, pub sessions, or on the concert stage. Bethany grew up playing both classical and folk music with her family in northern New York and was drawn to the New England dance scene after discovering the world of festivals and music camps in her teenage years. Bethany is a mainstay in the New England contradance circuit, playing in countless combinations of the scene's myriad musicians.
https://www.bethanywaickman.com/

Dereck Kalish (Sound Engineer) has been contra dancing since 2005 and going to local dances in New England, mostly the Boston area, just about every week. Around 2011, Dereck became both a caller and sound engineer, with a focus on providing the best service possible to make for a fun and successful dance. Providing great sound for weekly dances, and larger events from Pinewoods Camp, Tropical Dance Vacation St. Croix (contra week), Peterborough Snow Ball, NEFFA, CDS to name a few. Dereck can be seen calling English or contra dances throughout New England.